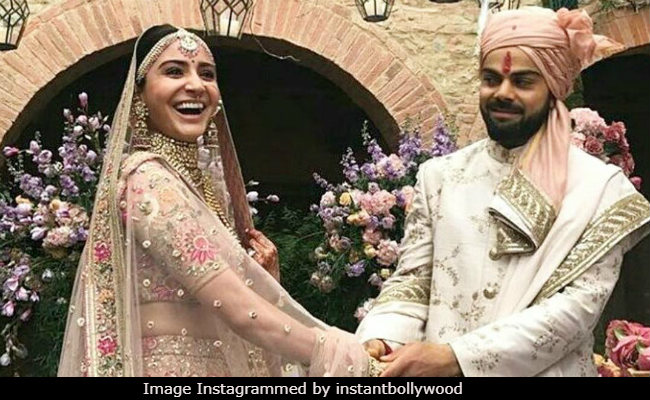 Anushka Sharma and Virat Kohli posted pictures of the wedding on their Twitter accounts and video clips from the jaimala, engagement, mehendi and other functions have been sourced and posted by fan clubs

Video footage from inside the wedding of the year has gone viral online after actress Anushka Sharma and cricketer Virat Kohli announced on Monday evening they were married. The newlyweds had a series of pre-wedding functions in Italy, ending with a traditional Hindu ceremony. The guest list was extremely restricted for the hush-hush festivities – none of the couple’s celebrity colleagues attended and the ladki and ladkewalo comprised of family and close friends. Anushka and Virat posted pictures of the wedding on their Twitter accounts and video clips from the jaimala, engagement, mehendi and other functions have been sourced and posted by fan clubs.

Anushka Sharma and Virat Kohli posted this on their Twitter accounts: “Today we have promised each other to be bound in love forever. We are truly blessed to share the news with you. This beautiful day will be made more special with the love and support of our family of fans & well wishers. Thank you for being such an important part of our journey.”

The couple married at a Tuscany resort on Monday and have two receptions planned back home – the first will be held in New Delhi on December 21, the second in Mumbai on December 26. Anushka and Virat will then fly to South Africa where they will spend New Year’s Eve together, after which Virat stays on to play a series and Anushka returns to resume work on her film with Shah Rukh Khan and Katrina Kaif.

Anushka and Virat will live in Mumbai, in an apartment in Worli, with Virat moving cities from his hometown of Delhi.

The couple have been inundated with wishes from colleagues on Twitter – Amitabh Bachchan, Sridevi, Shah Rukh Khan, Priyanka Chopra, Sachin Tendulkar and many others have posted messages.

Anushka Sharma and Virat Kohli met while filming a commercial in 2013. Last week, the Internet ignited with wedding rumours which the actress’ spokesperson denied. Anushka and family were then pictured flying out of Mumbai to an undisclosed location, reported to be Italy via Switzerland. Several possible wedding dates were floated online, with December 15 being the consensus – it was clearly misdirection and Anushka Sharma and Virat Kohli married with full band baajaa baaraat on Monday.

View all posts by rajtechnews →